The White House Sunday announced that United States President Donald Trump will host President Muhammadu Buhari of Nigeria in Washington DC on April 30, 2018. The meeting comes weeks after former U.S. secretary of state Rex Tillerson, visited Nigeria. Tillerson was fired as soon as he returned to Washington from the trip which took him to other African Countries in March.
It would be recalled that Trump reportedly referred to African nations as “shithole countries” in January. The comment was however denied by White House. 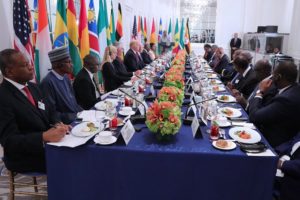 The first and only time the two leaders had met was at a working luncheon Trump had with some African leaders in New York last September, during the UN General Assembly.

The priorities include “promoting economic growth and reforms, fighting terrorism and other threats to peace and security, and building on Nigeria’s role as a democratic leader in the region”, she said.

This announcement is remarkable as Nigeria prepares for another round of General Elections in 2019. President Buhari, had last week announced his decision to seek re-election as President.