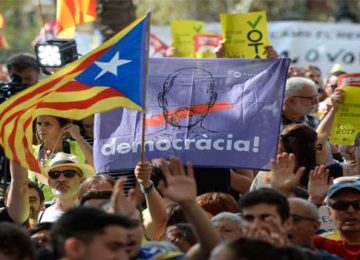 People hold Catalan pro-independence ‘estelada’ flags outside the high court in Barcelona on September 21, 2017. After a day-long protest that lasted well into the night, several thousand independence supporters gathered again in front of the high court in what influential separatist organisations said would be a “permanent mobilisation” until the officials are freed. Josep